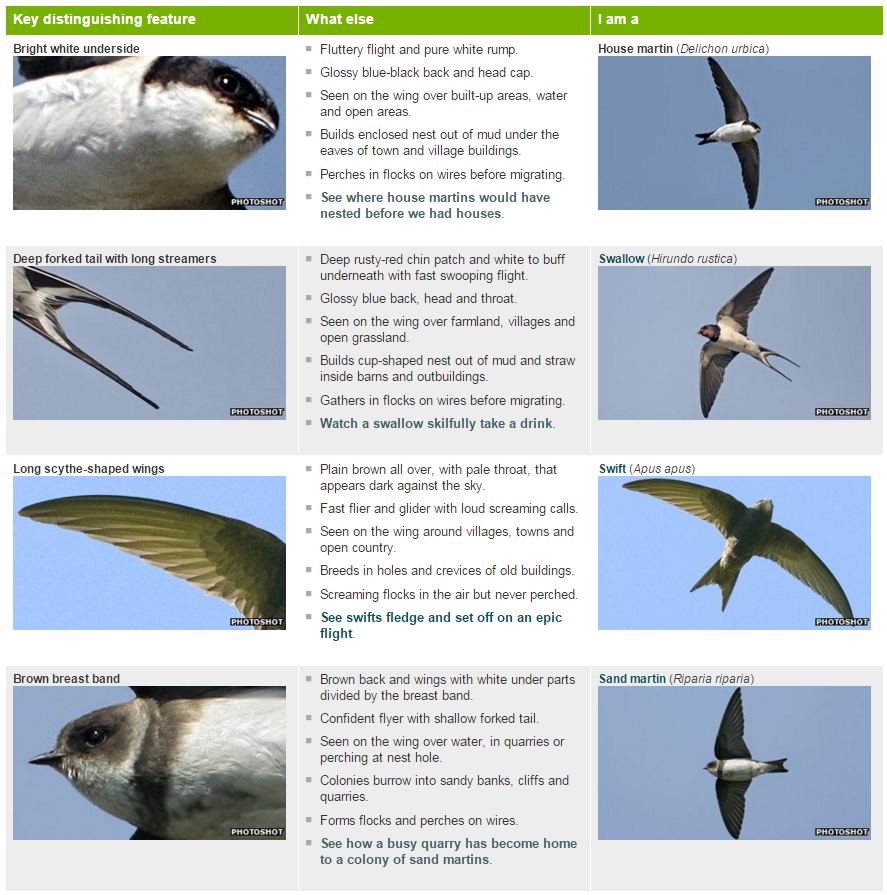 As well as eating insects in your neighbourhood, Swallows and House Martins are amazing to watch flying and nesting, and have had a great connection with humans for a long time. How can we return the favour?
Helping them nest without disturbing them:
Some people think that having these special birds nest in the houses or buildings are a nuisance and make a mess!
You must tell them that about how amazing Swallows and House Martins are, how they are declining and how they need to be our welcomed guests. Also, it is easy to solve the problem of mess: instead of destroying nests, put up a small board underneath to catch droppings. :)
More information on droppings and parasites (not harmful to humans):
https://www.rspb.org.uk/discoverandenjoynature/discoverandlearn/birdguide/name/h/housemartin/droppings_and_parasites.aspx
Encourage insects for the birds to eat by planting lots of insect-friendly flowers and plants in your garden!
Use this amazing Barn Swallow Observation Guide from the Wild Bird Society of Japan - an excellent guidebook for schools and teachers with survey forms and instructions on how to conduct Swallow surveys!
Keep us updated on www.facebook.com/springaliveforbirds :)
Назад
Іншыя сайты па Жывой Вясне
International | Albania | Azərbaycan | Беларусь | België | Bosna i Hercegovina | Botswana | България | Burkina Faso | Cameroon | Česká republika | Cote d’Ivoire | Crna Gora | Cyprus | Deutschland | Eesti | España | Ελλάδα | France | Ghana | Հայաստան | Hrvatska | Ireland | מדינת ישראל | Italia | Қазақстан | Kenya | Latvija | Lebanon | Lithuania | Luxembourg | Magyarország | Македонија | Malawi | Malta | المغرب( | Mauritanie | Nigeria | Nederland | O‘zbekiston | Polska | Portugal | Росси́я | România | RSA | Rwanda | საქართველო | Schweiz | Senegal | Sierra Leone | Slovenija | Slovensko | Srbija | Suomi | Sweden | Türkiye | الجمهورية لتونسية | Uganda | UK | Україна | Zambia | Zimbabwe
FrançaisDutch
GreekEnglish
GaeilgeEnglish
עִבְרִיתالعربية
DeutschFrançais
ru-uzen-uzuz-uz
DeutschFrançaisItaliano
العربيةFrançais