Learn about the Bocian biały

It is also very easy to recognize the sound a Stork makes – they have a very characteristic way of clattering their bills together, sounding like the clattering of two thick sticks.
The easiest way to see a Stork is probably on its nest, but you can also easily find it on wet meadows and newly mown fields.
Storks’ nests are very big and built in high places with good all-round views.
You can see Storks in Europe from March till late August.

How to tell the difference between a young White Stork and an adult?
The sexes are similar in appearance, though males are slightly larger. Youngsters have a grey bill and dull red legs. They are also more greyish than their snowy-white partners.

What do they eat?
White storks feed on rodents, earthworms, grubs and all kind of small reptiles and amphibians. They do not have any prefered food - they nourish with animals that are most popular in the surrounding.

Stroks' nests
European White Storks have been building their nests on man-made structures since the Middle Ages. They can be found on rooftops, towers, chimneys, telephone-poles, walls, haystacks, and specially constructed nest towers. Storks return to breed in the same place, or very near to it, every year. Youngsters always try to return near to the place they were born – you can even find some nests that have been in continuous use for hundreds of years!

Population of Storks in Europe
Unfortunately you can only see White Storks in some European countries. For the last century, the numbers of Storks returning to Europe has been getting smaller. The reason for this is probably a combination of climate change and loss of wetland habitats.

NABU, German Partner of Birdlife, is tracking 6 White Storks with satellite transmitter. You can follow them here.

White Storks migrate to the south for the winter – they need to do it to make sure that they can find enough food, it is not easy to find food in the northern parts of Europe in winter. Some of them spend their winter in the south of Spain, and some of them go further south to the central Africa. They can travel up to 12,000 km!

Storks travel only by day, and to travel long distances they must use a soaring flight on hot currents of air called thermals. Thermals are invisible – they are only a hot air. Entering a thermal, a Stork is pushed high by the rising air. When the stork leave the thermal at its top, it can gently glide downwards over long distances.

It is much easier for birds to travel in larger flocks. When one bird finds a thermal all others follows it and start soaring. The more that birds travel together, the easier for them is to find a good thermal – that is why bigger flocks travel faster than single birds. In autumn, you can see flocks of up to 10,000 birds at a time.

NABU, German Partner of BirdLife, is tracking 6 White Storks with satellite transmitter. You can follow them here. 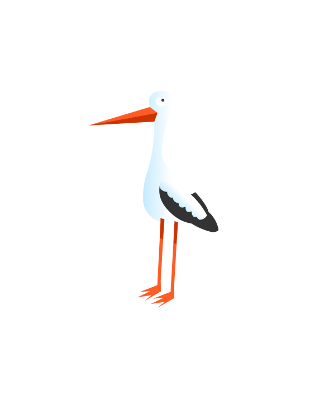